I always knew Ganesh Chaturthi is huge here but it was only when we arrived at an absolutely empty camp in the Bannerghatta National Park that I realized that it is indeed pretty huge. Who'd waste time in the jungle when it's time for endless fête and fiesta out there in the city.

Well, we did and gosh the “royal treatment” we relished for being the only guest in the Jungle Lodges and Resorts. Apart from a particularly paranoid friend of ours, rest of us were savoring every bit of the solitude. 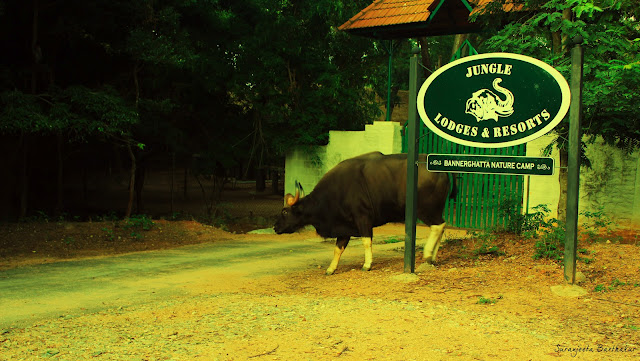 There you go. That is indeed a bison right outside our camp. No kidding bro'! We were actually into the wild.

It was mid-afternoon when we reached our destination (an hour late from the allotted time. Expected!) so as soon as we arrived, it was lunch time. And although I know people usually (not usually, always) do not take my comments on food seriously, trust me when I say this that the food was excellent. My taste buds were rocking and rolling. 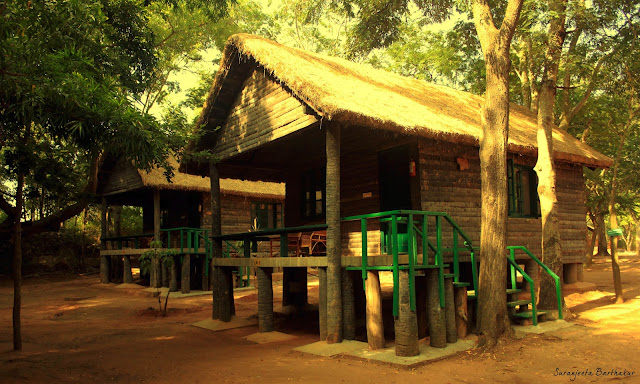 These are the lodges...where we didn't stay. We went for the tents instead. Cheaper and wilder. 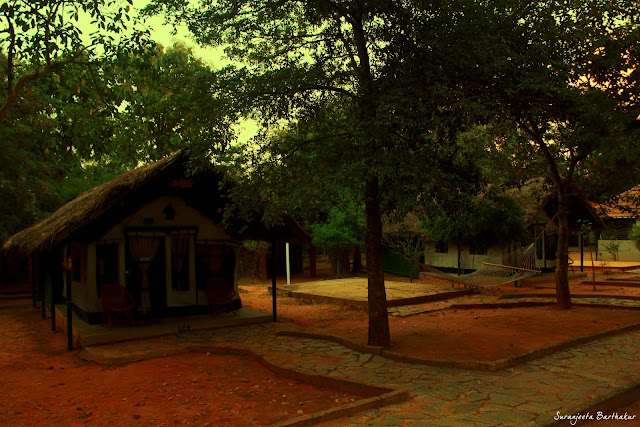 They'd put up hammocks in front of our tents and at once I jumped into one with some help and assistance from my friend (it was too high for me or probably I'm not used to hammocks). 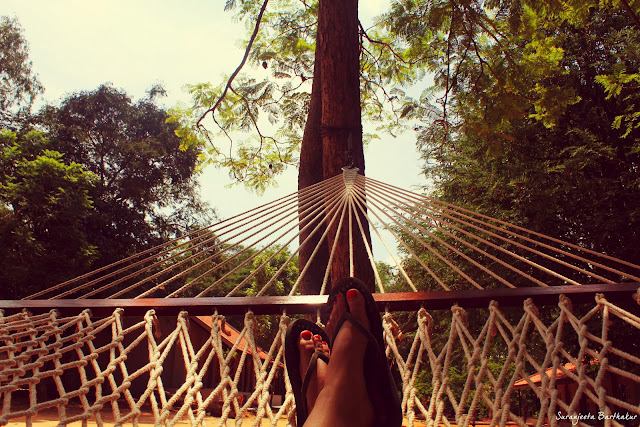 Ah! This is one inexplicable moment. 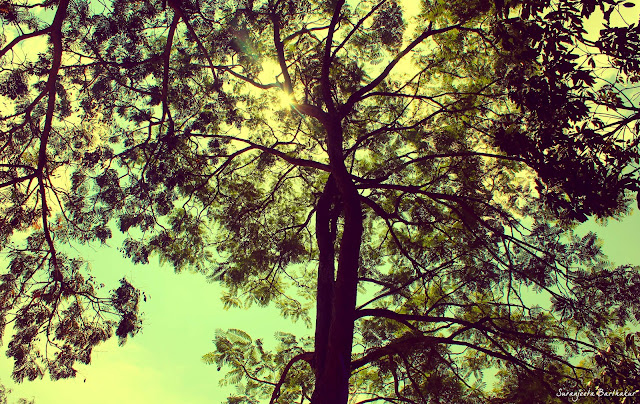 Sunrays peeking through the tree as I lay lost in a whirlpool of thoughts. 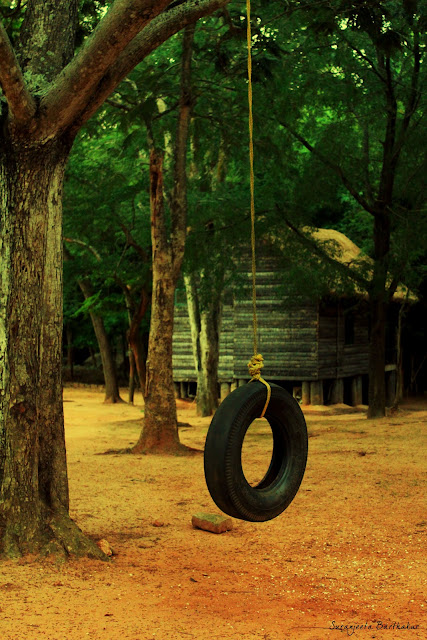 And I had problem sitting comfortably in this tire swing too. Guess I'm no longer as young and wild as I used to be and just in case that made you happy, I was only kidding.

It wasn't long after we had our lunch that the safari van arrived. With my camera safely around my neck I was all set for the most awaited jungle tour. The only problem was, I'd left the battery for charging in the tent. Had I realized it in the jungle while spotting some cool animal I would have killed myself. Thankfully, just when I was about to climb the van the thought struck me. Thankfully! 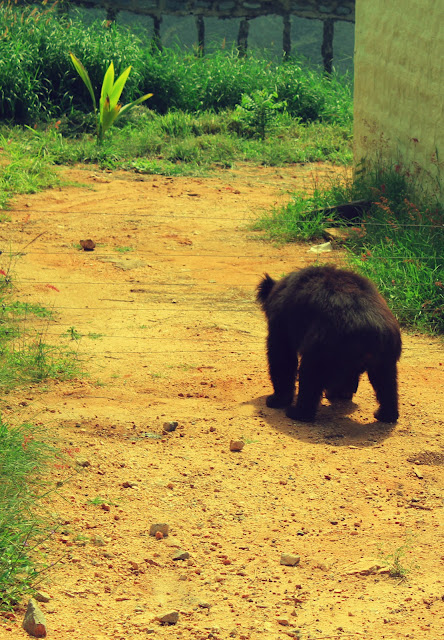 I know this is not the best picture to put up but how often do you see a bear showing his butt to you and defecate. A rare sight I must say. 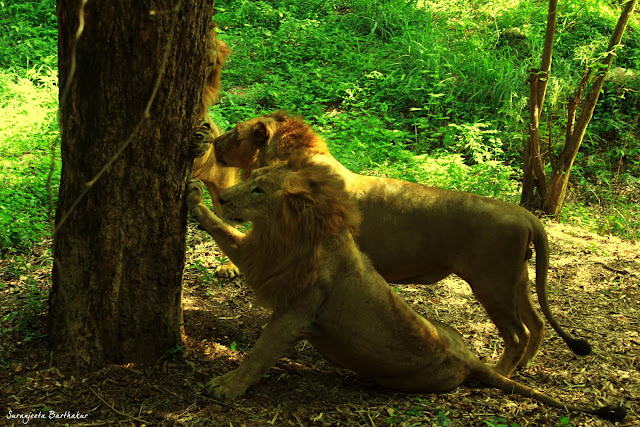 It was strange that this pride of lions was trying hard to climb the tree considering there wasn't anything enticing up there. As far as i know, lions usually don't climb trees. It was only later when my friend mentioned that these ones have been rescued from the circus that my confusion was cleared. 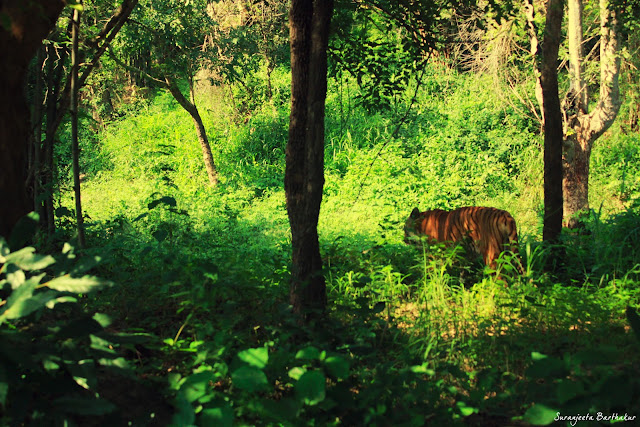 A gorgeous sight. Tigers are exquisite. A beautiful painting of God. Orange with a hint of white here and there and ah those perfect stripes.

A white tiger taking a nap in the shade. 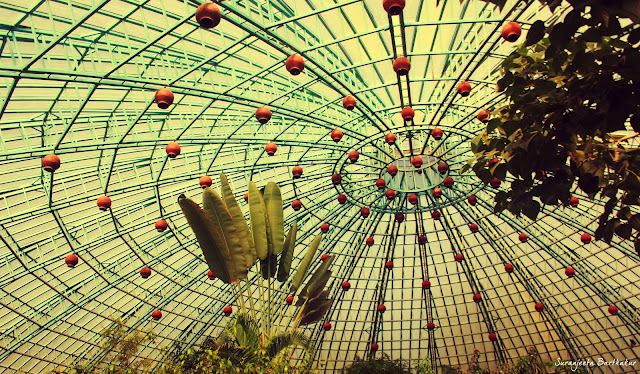 After the jungle safari we were dropped at this butterfly park. Never had I seen so many different varieties of butterflies, all at one place. It was a treat, coming here. 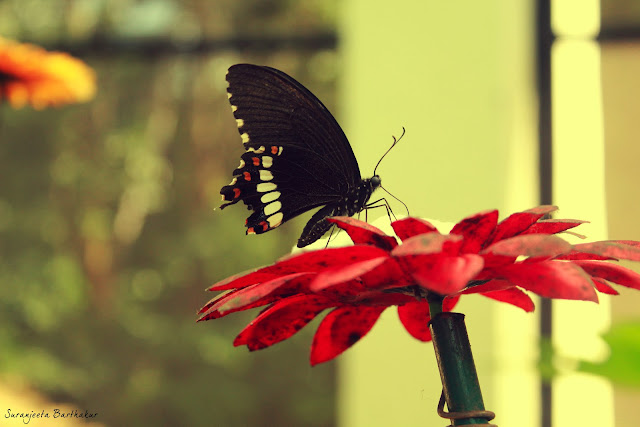 You can even see its eyeball (or whatever they call it). Crystal clear! 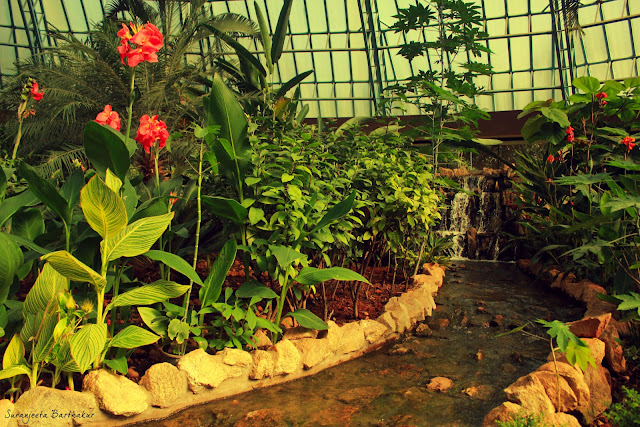 An artificial stream inside the glass house.

From there we went to the zoo. I don't like zoos. But we couldn't avoid it because my friend, the scary pants one, wanted to check out some alligator or something. Can't remember what. A bad idea let me tell you.

From there, we headed straight back to the tent. 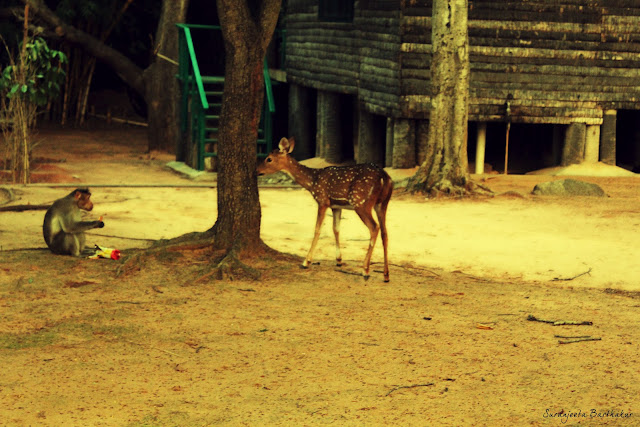 In India, monkeys are no less than thieves. This pack of biscuit that the monkey here is so proudly eating from had been stolen right from our room. I wonder if that deer was also craving for it. Deers eating biscuit. Haahaa! Something about that is funny. Ain't it? 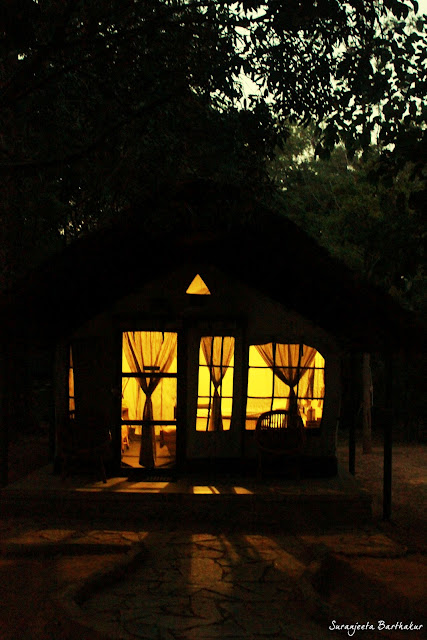 A lit up tent in the evening.

At night, they made us a bonfire and although it wasn't cold (at all) we were sitting around it like morons. But then somebody suggested we could play musical chair and Gosh how badly I fell this one time while claiming my chair. It was hilarious! 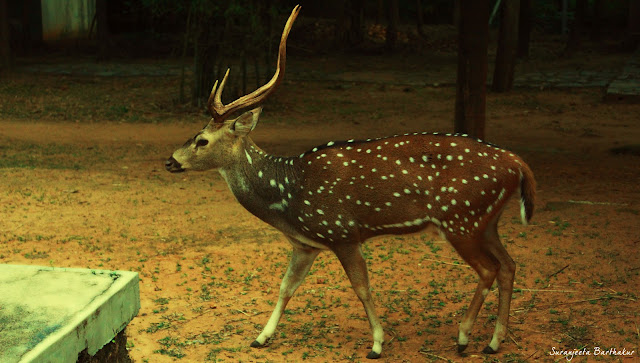 This one was a pet. He kept roaming around the place all the time. We fed him leaves the next day when we spotted him in the morning. A friendly little creature.

All of us woke up quite early for trekking.

The guide told us that a few months back a bison had killed a tourist who tried feeding him something. Poor guy! I'd like to add here that hearing this dreadful piece of information our scary pants gave a nervous giggle and tried one last time to convince us to go back to the lodge. Guess the rest! 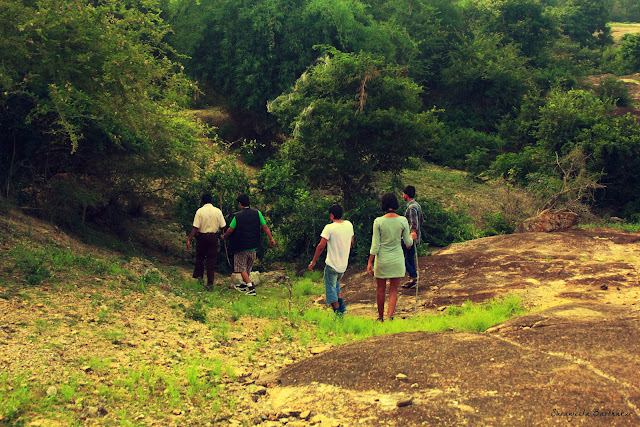 Trekking through rocky forest path. Felt like I was in some National Geographic expedition. 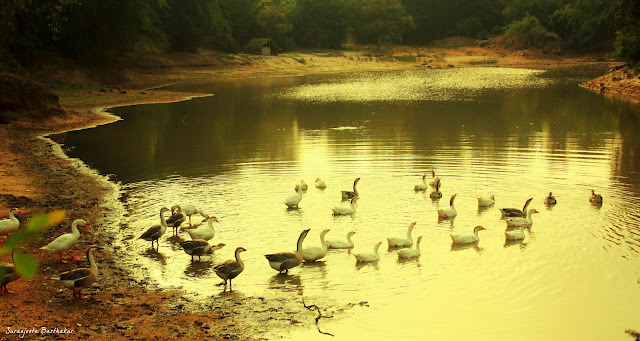 A herd of wild ducks making their way through the lake.

An abandoned watch tower. The view from up there was enthralling but alas I'd given my camera to the guide. 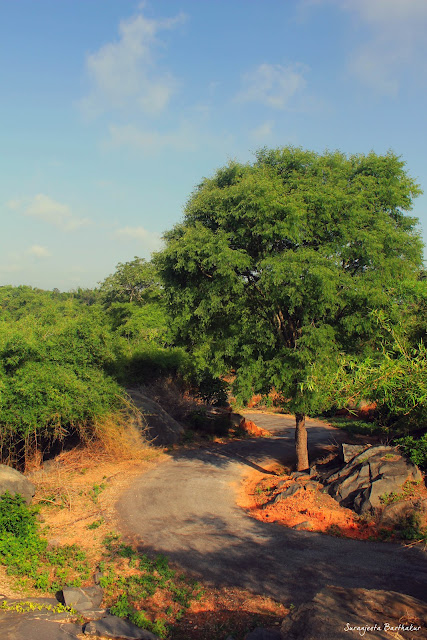 That was it. The trekking was just a wild walk through the jungle. But that doesn't mean it wasn't fun. It was enticing to climb those rocky trails, walk through those choppy roads, gaze at those beautiful lakes and, in other words, to be so close to nature.
Wild peace it was.

Whoosh went another while!

There I was, in the middle of a lake, rowing a boat, nothing in the world to wrack my brain with.

There I was, gazing at the clouds from my car window, its misty arms graciously wrapped around the hills surrounding the place.

There I was strolling in the beach, the salty sea water touching my feet from time to time reminding me that like the waves even this moment cannot be held forever.

Looking back at those moments i wonder for a while if those times were ever real !